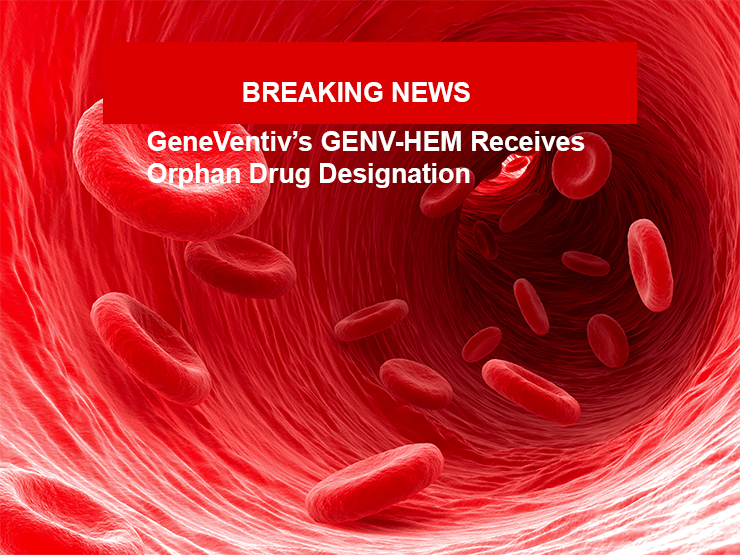 Preclinical data provide quantitative evidence of GENV-HEM’s ability to achieve phenotypic correction in animal models of hemophilia, independent of the presence of any clotting factor inhibitors.

RALEIGH, NC – GeneVentiv Therapeutics, a pre-clinical gene therapy company, today announced that the U.S. Food and Drug Administration (FDA) has granted Orphan Drug Designation (ODD) to GENV-HEM for the treatment of Hemophilia A or B with or without inhibitors.

“I am pleased to announce our Orphan Drug Designation for GENV-HEM from the FDA.  With no approved gene therapies for hemophilia patients with inhibitors, we are dedicated to driving GENV-HEM forward as the first gene therapy for both hemophilia A or B with or without inhibitors,” said Damon Race, CEO of GeneVentiv.

The FDA Office of Orphan Products Development grants orphan designation for novel drugs or biologics that treat a rare disease or condition affecting fewer than 200,000 patients in the U.S. Orphan designation qualifies the sponsor of the drug for various development incentives of the Orphan Drug Act, including a seven-year period of U.S. marketing exclusivity, tax credits for clinical research costs, clinical research trial design assistance, the ability to apply for annual grant funding and waiver of Prescription Drug User Fee Act filing fees.

Hemophilia is an inherited bleeding disorder caused by a deficiency of the functional clotting factor (F) VIII (hemophilia A) or FIX (hemophilia B).  Approximately 20–30% of patients with severe hemophilia A and up to 10% of patients with severe hemophilia B develop inhibitors after protein replacement therapy.  The development of inhibitors (anti-drug alloantibodies to the missing clotting factor) remains the single most challenging obstacle to managing hemophilia with protein therapy.  GENV-HEM is the first gene therapy treatment in development to treat both hemophilia A or B with or without inhibitors.

GENV-HEM is an Adeno-Associated Virus containing a transgene encoding for activated factor V (FVa) variant.  Within the coagulation pathway, FVa functions downstream of FVIII and FIX as a co-factor of FXa to promote hemostasis.  A single infusion of GENV‑HEM would result in endogenous expression of FVa, improving hemostasis in patients with either FIX or FVIII deficiencies independent of the presence of any respective clotting factor inhibitors.  GENV-HEM has the potential to offer multiple benefits for severe hemophilia patients including multi-year disease ameliorating hemostatic phenotype.

Dr. Samelson-Jones of GeneVentiv’s Scientific Advisory Board (SAB) remarked, “GENV-HEM represents a potential new approach in hemophilia gene therapy.  The therapy combines a novel bypassing strategy with the accumulating clinical experience of AAV gene transfer. It is designed to improve hemostatic function by circumventing missing upstream clotting factors, such as factor VIII or IX, as well as inhibitory antibodies.”

“This unique approach focused on the “bypass” strategy using FVa variant by AAV liver gene therapy has the potential to simplify the treatment of severe hemophilia and to provide an innovative intervention for hemophilia A with refractory inhibitors to FVIII or those hemophilia B with inhibitors to FIX with contraindication of FIX protein/transgene exposure FIX, which are certainly challenging clinical scenarios” as noted by Dr. Arruda, chair of GeneVentiv’s SAB.

GeneVentiv Therapeutics is developing the first gene therapy for Hemophilia A or B with or without inhibitors.  GeneVentiv’s GENV-HEM, produces clotting Factor Va, a co-factor, which allows normal clotting in response to injury.  No curative gene therapies for hemophilia patients with inhibitors are currently available. www.geneventiv.com